The Update is Here!! 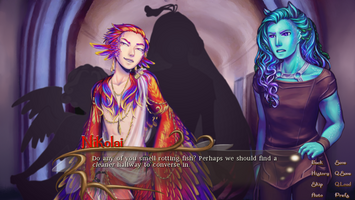 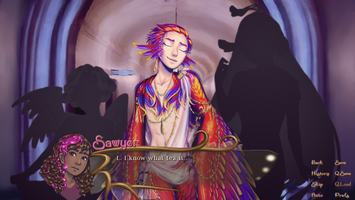 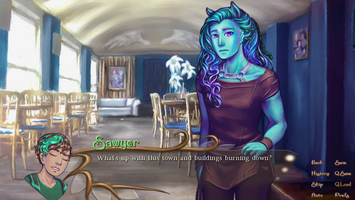 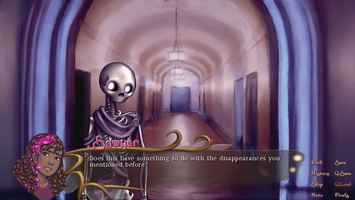 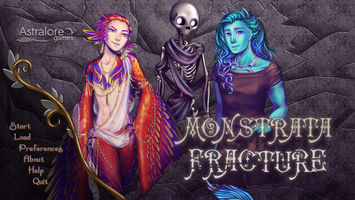 This took a lot longer than we planned! But we made a lot of improvements and we hope you'll appreciate the game looking all spiffed up.
Is it as cleaned up as we'd like? Well, not quite. But it's as cleaned up as we had hoped to make it back in December, and moreso even. We'll continue to add changes and updates to it as we go!

So what's in this update?

In the last devlog, I promised a lot of stuff, like updated backgrounds, character expressions, background character silhouettes, and an updated GUI. I'm happy to say that we've put in all of those things - and MORE!

The game now sports a massive variety of expressions for the love interests, along with speaking animation!  (Edit: Unfortunately, we forgot to set the text speed for this build, so if you want to see the speaking animation, go into your game preferences and turn down "Text Speed")

There are also nine unique silhouettes for the background characters that have speaking lines! Some of these will be updated to be full sprites at a later date, as some of these have the potential to become love interests themselves!

Other things we didn't promise, but did anyway: Music! The game was severely lacking in the audio department, but I didn't want to make promises until I could be sure this would be an attainable goal for us right now. But this update provides the game with a nice assortment of background tunes - and we're working with a composer to add some unique tracks as well!

MC's face!! That's right, you can finally see what you look like - and customize it! A side image of MC appears whenever they have speaking lines, and at the beginning of the game you'll be prompted to make some design decisions for them. Choose long hair, short hair, skin tone, accent color, and gender! As of now, the hair length will default you to male or female, but you can easily change this by clicking the little "M*?" or "F*?" icon to the right of your character image in the customizer for a lovely variety of pronoun options!

On top of having a real face, MC has their own set of expressions, so you can see their reactions to the world around them!

Beyond that, there are a couple small added scenes and line edits - nothing major, plot-wise.

As I said, there's not much new plot content in this update. Right now, we're doing a bit of a plot overhaul (this did start as a jam game, after all) but we're aiming to roll out a 15k word content update every two or so months until the game is complete, with the hope that we'll be done by the end of the year.

Will it cost money?

Last time, I said that we were planning to make the extended game a paid game and that extra routes would be paid DLC. I'm rescinding that statement now. We've decided that all of Monstrata Fracture's content will be free, with only a few minor exceptions. There will be some small paid DLC, such as the glasses DLC and the digital artbook, but none of the plot content will be paid DLC.

How can I support this game?

Everything you do to interact with us or our product helps support it. Donating to the project is always very appreciated, but there are a ton of free ways to support, too!

Leaving us a good rating, commenting on the game page, sharing the game with your friends, cheering us on in our Discord server, interacting with our social media pages (Facebook, Twitter, Tumblr) - any of these things will help put this game in front of more people and encourage us to keep working on it.

We're also looking at getting a Patreon and an online storefront to sell physical merch, so if you want to sport some Monstrata swag, that would be a great way to support us too! We're hoping to have some small amount of swag available at PAX East - if you'll be there, come stop by our booth in the Diversity Lounge, where we're being hosted by the awesome Jay Justice!

Don't date monsters. Your mother would be disappointed.

+1 for the fact that customization in this game includes the skin colour. So many games around that allow you to customise the character will give you options (like gazillions of eye colours and hair colours) for everything except the skin colour (cough-fire emblem-cough-cough) which thoroughly irritates me. As a programmer I'd be very interested in learning how you managed to acheive having the skin colour controlled by a slider. Also I enjoyed playing the game, look forward to the updates.

Reply
The Jester Guy2 years ago

Great job as usual, folks. Keep it up!

Thank you very much!! I hope you like it!!

Reply
The Jester Guy2 years ago

Will do! Looking forward to more updates! :)

I've just played it, and I liked from the new features, including the soothing music. :)

The characters and the settings feel more alive, specially Deka, haha! But anyway, the way he lifts up his arms while he's blushing is very cute looking. The music that plays when you're hanging around with him is very nice and pleasant to hear. <3

I also liked how you can customize your character but I'd be interesting if it there were options to make your MC more effeminated or emasculated for both genders, and be able to change your character's appearance during the story.

Some more suggestions (if possible):

~ Just be friends with one of three NPCs and attempt to date one of the other two characters;

~ Obey your mom's orders by ignoring them all and live your life as usual;

~ Be more intimate with the one NPC you chose and engage into a relationship with them, accepting all risks;

~ Date the one NPC you chose for some time and then part ways with them, obeying your mom's orders;

~ Be a "very rude" perverted and manipulative person and date and/or have sex with all the three NPCs, one character at time (I always found funny how the MC is so polite with everything);

~ Not have a serious relatonship with the NPC you chose but at the same time you're both open to a deeper intimacy and friendship between each other.

- Go deep in Deka's subplot about "the Created" and also subplots related to racism, alternative reality and "the Unsight gift"(sp?) and the supposed "rivalries" between mosters;

- Make the MC have more than one personality.

Whew, that's pretty a laundry list of suggestion, haha. But I hope they help you folks somehow. I'm looking forward for more progress and how the new content will turn out to be. Have a nice week. :)